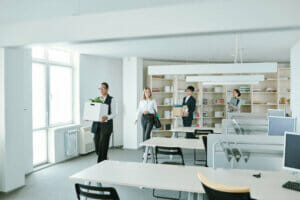 Although it is easy to forget during these days of “all COVID all the time”, there is a myriad of other crises that might force you to close your regular working locations due to physical damage, such as from a destructive storm, wildfire, or – my personal favorite – a broken water pipe. For these “normal” office closures, there are some considerations to give thought to and plan for appropriately that are specific to when your office is closed for repair and when you are returning to work.

First, a note about immediate needs after the damage has occurred. It is likely that you won’t be able to let staff in to collect their personal or business items. Normally, damage severe enough to close your office means that you also can’t let unauthorized people into the area. For example, there could be electrical hazards that require a great deal of care. You should give consideration to hiring a professional office moving company to pack up each desk and store contents in boxes for the duration.

That process worked very well for a company I worked for in the past that faced three flooded floors after a high-pressure water pipe broke one Sunday morning. The movers packed up everything – they didn’t try to make their own judgments about what was salvageable. We were lucky that the office tower was connected to empty retail space on the lower level. We rented it as storage for the eight weeks it would take to completely gut and rebuild the floors. Later that week after the movers relocated all employee items, we allowed those impacted to come to the rented space. The moving team would pull the boxes associated with their desks and allow them to go through their belongings to determine what they wanted to take home and what they wanted to put back into storage.

We also had forms so that they could make a claim for any personal items ruined by the water (you have no idea how many pairs of shoes people keep under their desk until they all get wet!). It was a great process, but our lesson learned was that we should have required everyone impacted to go through their belongings – because wet items stored for 8 weeks get mildewed. We had to reopen the claims process for that and because two or three items were lost and not returned to people’s new desks by the moving company. Not bad for an event impacting approximately 750 people though.

We did a few other things to return to the office that worked really well and could be applied to other similar situations:

Abruptly closing and then quickly reopening office space is a monumental task. Luckily, the business continuity and risk management community loves to share best practices, so be sure to reach out to others so you can be more prepared when the time comes for your own event.

Operational Resilience: Rewriting the Stars in the Face of Adversity