A Glimmer of Hope: Resilience at the BCI World Hybrid 2022 Conference

Since the lift of the first lockdown in June 2020, we have talked incessantly about returning to the ‘new normal.’ For those of us in the resilience field, it was a common goal after disruption not to return to normal, but rather to a ‘new normal’: one where we had learnt from our mistakes and built a more robust operating model, possibly in a new direction of business.

This time last year, I would have happily exchanged our ‘new normal’ for the ‘old normal.’ Resilience professionals looked like they had gone nine rounds with Mike Tyson; after a year of early mornings and late nights responding to the pandemic, followed by a year racing to ensure compliance with the new OpRes policy, most of us were running on empty.

Then earlier this year, in-person events began to creep back onto the calendar. The first few were poorly attended, with many assuming (rightly) that others wouldn’t bother to make the trip into the city or that they wouldn’t feel safe doing so. What a difference six months makes though! Gradually, we have seen the return of the ‘conference,’ a phenomenon only remembered by those born pre-2001. 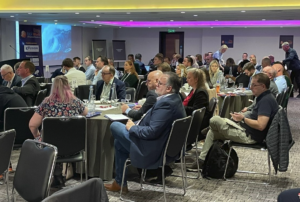 The Return of the Resilience Industry

Attendees flooded back from far and wide to attend the BCI World Hybrid conference in person, with tickets sold out far in advance. They discarded the jogging bottoms that had been a staple wardrobe item for the last few years, dug out the makeup that might still be in-date, and, in my case, tried to pull together an outfit that looked like it was in some way co-ordinated.

It’s incredible the relief and inspiration you can receive when coming together in person to discuss topics close to your heart, or at least top of mind, with those who understand what you’re talking about.  There are only so many times my friendship group can try to understand the difference between RTOs and Impact Tolerances and why it’s important. Sadly, it’s not a question that comes up very often in pub quizzes.

There’s nothing overly revolutionary in the field of resilience year on year, at least not concept wise, and I find it amusing that we still attend conferences expecting to hear about something new. We do, of course, develop new standards, policies, and, in the case of Operational Resilience, disciplines, but they are simply tools and resources for us to use to help build more robust and resilient firms. The technology and experience of personnel improve and develop over time, but the overarching practice is the same: you seek to understand what is important to your organisation, you build response plans, you test or exercise, and you implement lessons learned.

Riding the Wave of Operational Resilience

Stella Nunn, (Director, Operational Resilience at PwC) and I led the keynote session on Operational Resilience, providing guidance on what firms can be doing now to ensure they are not just compliant by the 2025 regulatory deadline, but resilient too. Given that many in the resilience field won’t be working for regulated financial services firms, the ‘stick’ of compliance isn’t there for them; instead, they have this opportunity to ride the wave of interest and engagement from stakeholders that the new regulations have brought with them.

Whether you see Operational Resilience as BC plus, or as a separate discipline, or think that it should sit under risk, the message is still the same. This is your opportunity to seize on the momentum happening across the industry; to zero in on what is actually critical or important to your firm, the customer, and the market; and to set-up a programme, team, and tools that will stand the test of time.

All too often, resilience programmes have become akin to compliance or tick-box exercises, with investments made for short-term ‘sticky plaster’ solutions to adhere with regulations or audit requirements. However, the regulators have made it pretty apparent that they want to see long-term solutions built in as well as changes to company culture and operational models. The collaboration between regulatory bodies worldwide has sent a clear message to firms that simply plastering over major issues is no longer enough and that they need to implement changes from the top.

Sarah Garrington went on to host a panel looking at the legends and myths surrounding the field of Resilience, that showed it’s very much a different journey for all. Many of the disagreements about terminology and requirements of a programme reflect the differences in focus around the world. Here at Fusion, we recommend taking the approach of thinking globally but acting locally; you can implement a programme and toolset worldwide but also limit or expand it according to the local regulatory needs. 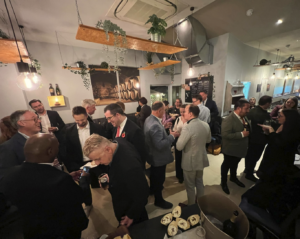 What you do gain from these sessions is a chance to share ideas with others at the tactical level, such as how to show return on investment to a board – thank you Charlie Maclean-Bristol. Or the opportunity to try out decision–making after a disruption – Susie Ansary led a great interactive session splitting us into teams, granting us budget, and asking us to select a response team and allocate that budget following an imaginary cyberattack. Felicity Aston and Alan Elwood went on to touch on the personal elements of resilience, discussing how challenging yourself to attempt the ‘impossible’ (such as crossing the Antarctic or running Ultra’s) helps to reframe what you see as achievable in the tough times.

Most importantly though, the after party has returned… I say that somewhat jokingly, but it’s those personal conversations that build relationships across the industry, that facilitate introductions to future bosses, colleagues, and peers who you can call on when you need help, advice, or guidance. On this occasion, we were lucky enough to be treated to wonderful wines and Italian cuisine at Satyrio’s, but you can also join Fusion’s virtual catch ups and conversations any time through our ENGAGE programme. Having had this glimmer of hope into the ‘new normal’ of conferences, we look forward to seeing you on one of Fusion’s virtual roundtables or at an in-person event in the new year…

If you attended the BCI World Hybrid event in person or virtually, don’t forget to catch up on the recordings of sessions that you may have missed – my personal recommendations to watch are:

Looking for additional resources while navigating the ever-evolving regulations and the winding road to resilience? Request a demo or contact your Fusion account manager or myself via LinkedIn today!

The Importance of Building a Culture of Trust and Compliance
Blog

Please note that selecting any option (in this window) will store a single cookie that retains your authorized cookie preferences.

This website uses Google Analytics to collect anonymous information such as the number of visitors to the site, and the most popular pages.

Please enable Strictly Necessary Cookies first so that we can save your preferences!