Women in Resilience is More Than a Trend The data is clear – women, on average, are better leaders in a crisis than men. This is the key message from a December 2020 Harvard Business Review study where women and men were rated on effectiveness, and women outscored men in most categories both prior to and during the pandemic.

So, why has women’s participation as operational resilience leaders continued to lag, and what can be done to promote more women leaders in the resilience job roles that have been male-dominated for decades? According to a McKinsey article titled “COVID-19 and Gender Equality: Countering the Regressive Effects,” women’s jobs in the first stage of the pandemic were almost twice as vulnerable to the crisis than the jobs of men. The result is that women have been disproportionately affected in terms of job force reduction during the pandemic. While 39% of the job force globally is women, 54% of the jobs lost during the early stage of the pandemic were positions held by women. One reason is that the virus has significantly increased the burden of unpaid dependent care, which disproportionately falls to women.

In this environment, Fusion Risk Management and BDO partnered to hold a “Women in Resilience” event with a panel of women leaders spanning business continuity, risk management, compliance management, and consulting backgrounds. In the US, where women tend to make up about half of the workforce, they made up only 36% of the North American membership of the Business Continuity Institute (BCI) based on the most recent membership data from 2019. The difference is even greater in almost every other region. With larger numbers of women leaving the workforce during the pandemic, the situation is bound to get worse before it gets better. 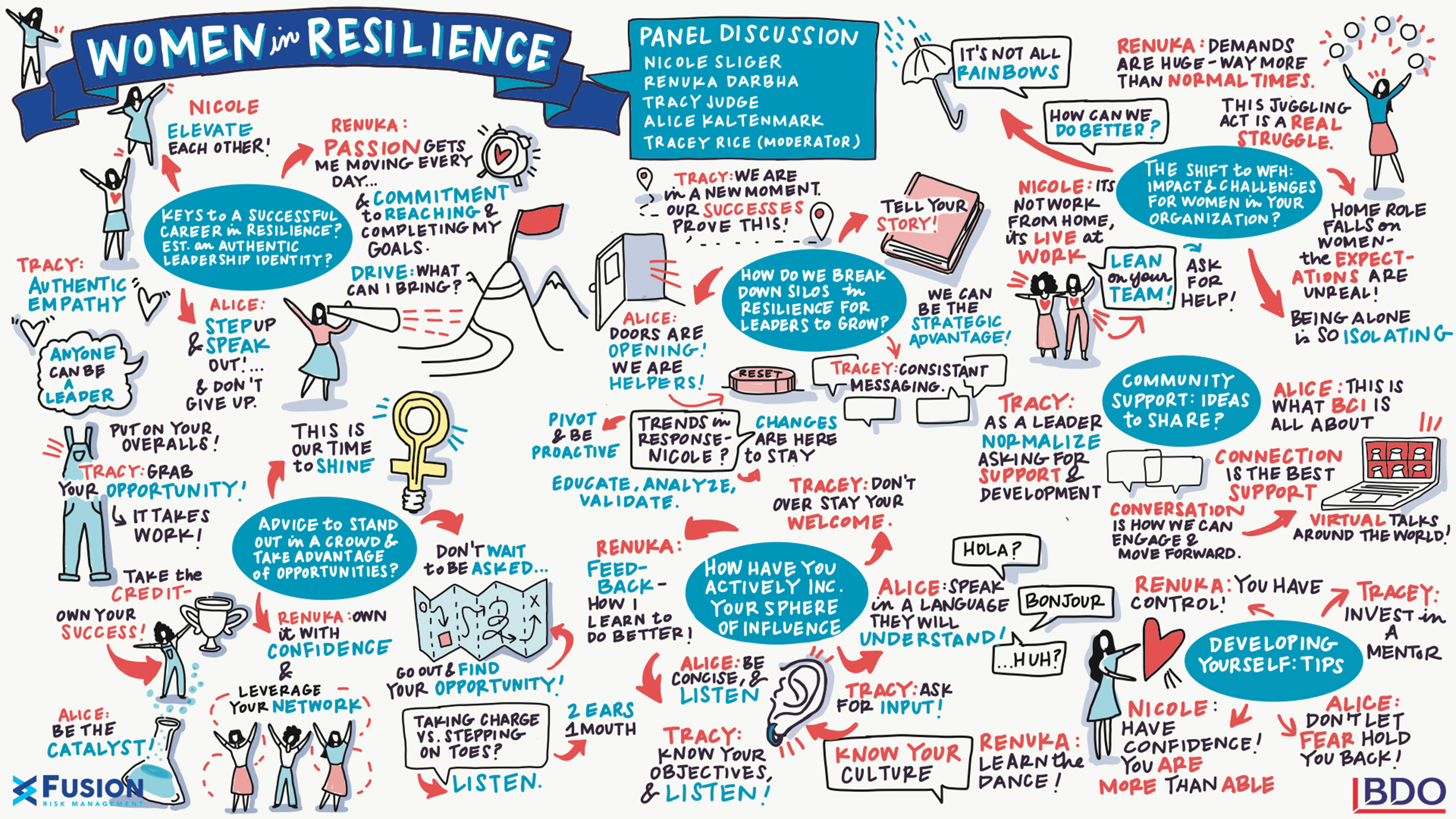 The 90-minute “Women in Resilience” virtual event was convened by a joint team from Fusion and BDO. The two companies have been partnering to help firms establish game-changing resilience programs by combining technology with thoughtful programmatic design, and they share a passion for advancing the cause of career success for women in resilience roles. On April 15, 2021, I had the pleasure of moderating a panel with four outstanding women leaders in the resilience industry who came together to share stories and ideas for growth and success based on their own varied backgrounds and experiences. The panel consisted of Nicole Sliger, Partner in Forensic Accounting at BDO, Renuka Darbha, Head of Resiliency at Pure Storage, Tracy Judge, Vice President of Global Compliance Program Management at TransUnion, and Alice Kaltenmark, President of BCI USA as well as having a leading role in Global Technology Resilience Governance at LexisNexis.

There were many lively moments as the panel discussed the keys to their success, advice they could give to stand out in a crowded organization, breaking down siloes, expanding your sphere of influence, and the value of giving back to the resilience community. Core traits of effective leaders were a big part of the discussion, including how to be authentic and the value of listening as well as telling your story to build consensus and share value cross-functionally between groups.

A poignant moment came when talking about the impact the pandemic has had on their work and ability to be successful. All agreed that the demands on women who have traditionally shouldered more of the caregiver role have made the pandemic year an “unreal” challenge. The idea was shared that this is not working from home but rather “living at work.” The heartfelt emotion of how hard this time has been on women was clear, with the key being having the ability to lean on your team and ask for help when you need it but having the confidence to do so. 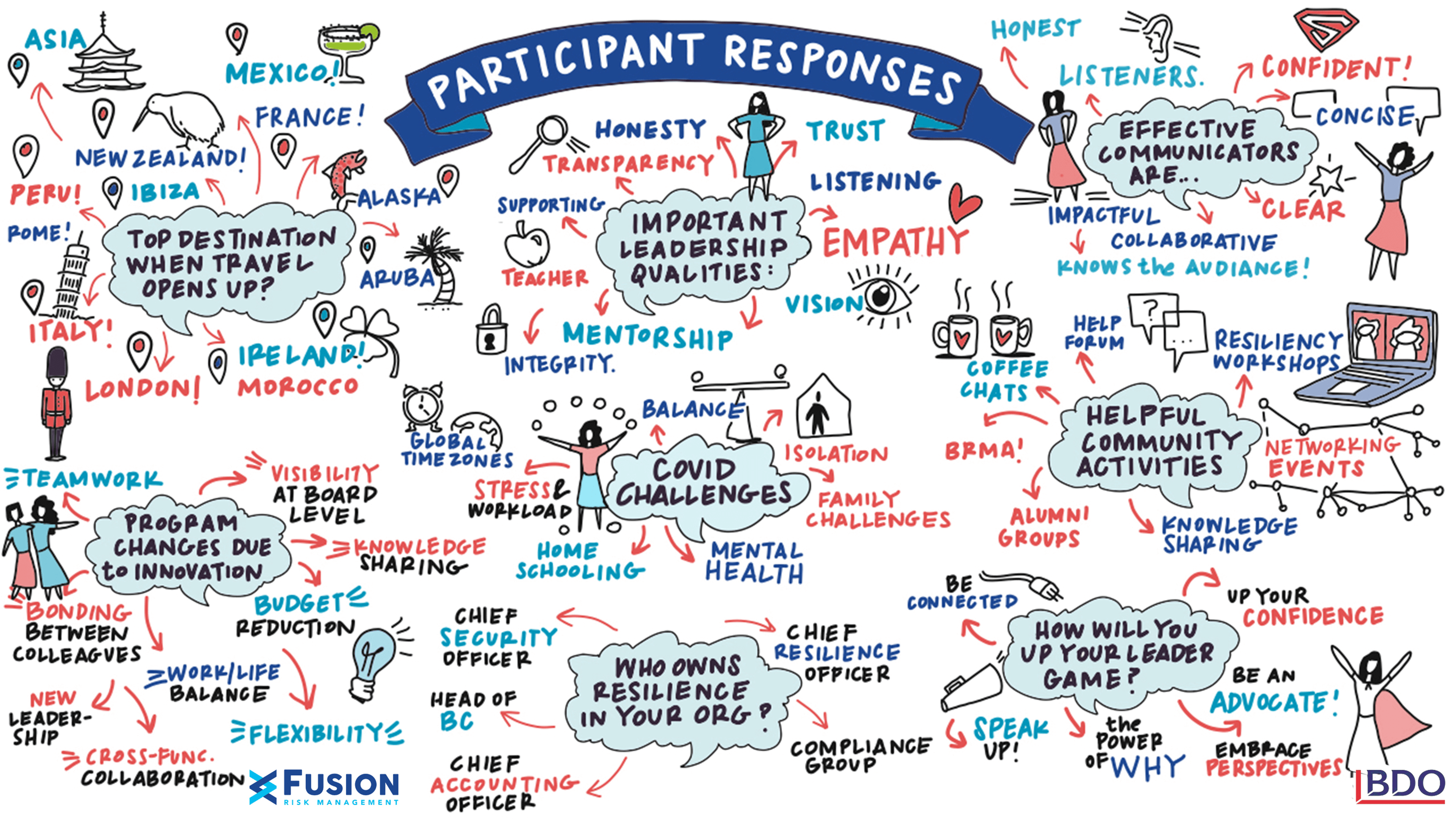 BDO and Fusion’s joint work on promoting women in resilience will continue as ideas for further sessions were abundant. With interactive polling and sharing ideas in real-time during the event, attendees identified their areas of interest, including finding a mentor, diversity and making room for everyone, working with executives more effectively to build leadership skills, and speed networking to build more connections. The shared passion for helping women be successful in resilience careers will propel this group forward. 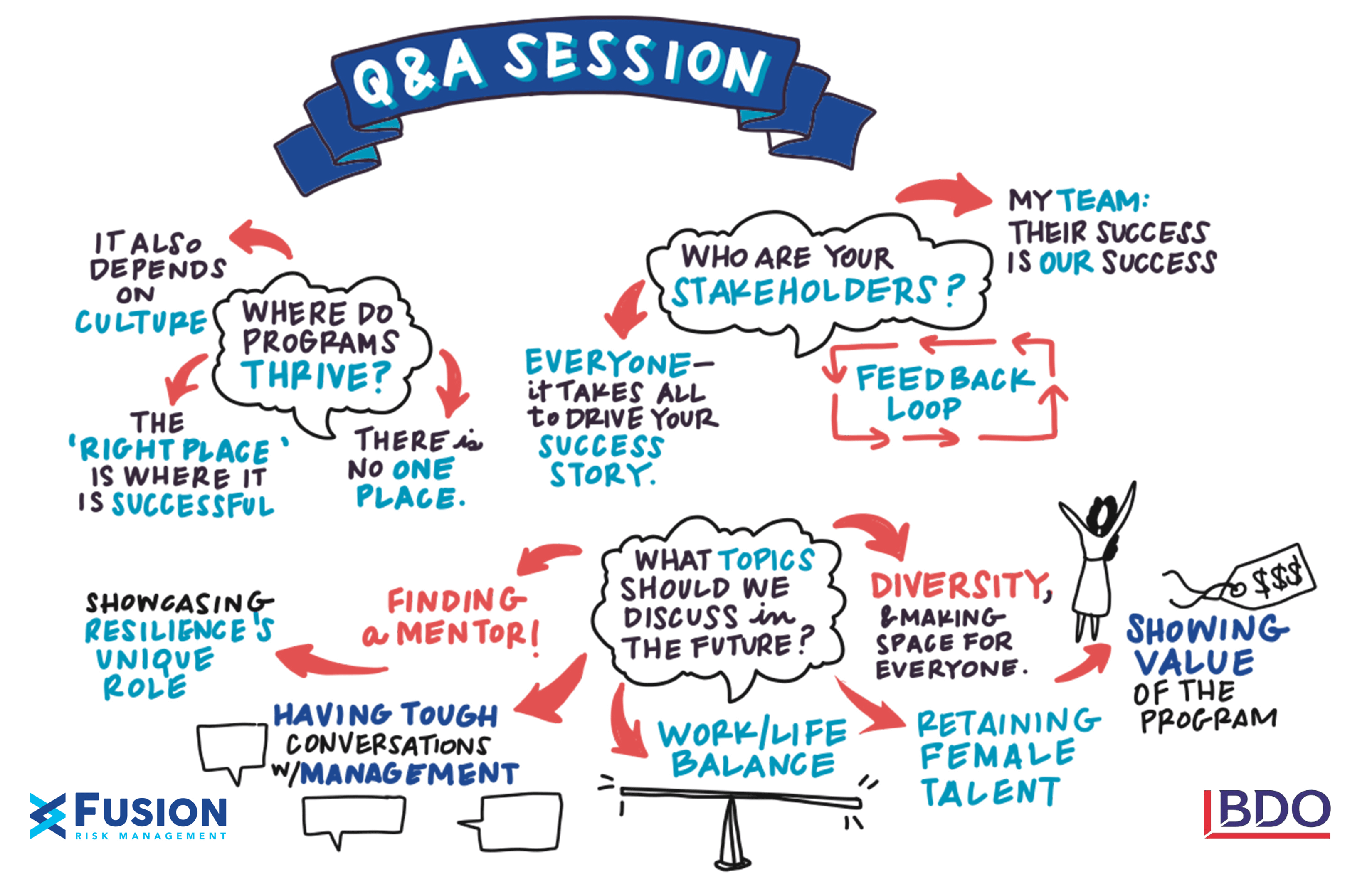